Faith in God is Trusting Him

Complete freedom comes through complete faith in God. To have faith in Him is to trust Him. But, trust Him with what? Blind faith is not dependable faith. When you put faith in someone, you need to know what you can trust them with.

When you don’t know someone, you don’t know if you can trust them at all. We can hear that we can trust someone, but once we know that person we can determine if they are trustworthy. How can that be different with faith in God? We are not expected to have blind faith in God. He is perfectly capable of bring us into that relationship with Him, if we pursue it.

Who Is He? Can We Trust Him?

Romans 10:17 says, “faith comes from hearing, and hearing by the word of Christ.” Christ’s words are recorded in the Bible. First, let’s briefly talk about who Christ is. Christ means messiah (savior) and Jesus is the Christ. God is triune. He is one God: Father, Son and Holy Spirit. (Matthew 28:19 and many other scriptures.) 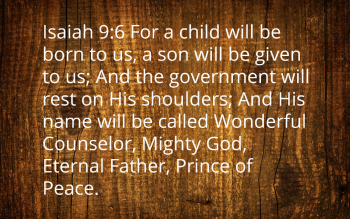 We see that Jesus told his disciples (and they recorded His words) that they can learn to have faith in God by believing His word and watching what He does. His works agreed with what He said.

Jesus Has Always Been God

To have faith in God, we need to understand who He was before He was born into His own creation, and what He did for us. Jesus was not always “Jesus”. He became Jesus at His birth into humanity, but He was always God.

That scripture goes on to say that He came to those who were His creation, but most did not receive Him. The ones who do receive Him, “to them He gave the right to become children of God, even to those who believe in His name…”. (Verses 11 and 12.) As children we become “heirs” with Christ! 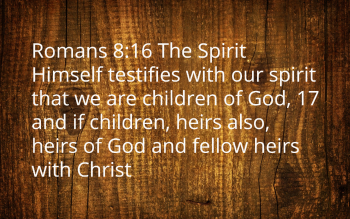 Titus 3:7, “…so that being justified by His grace we would be made heirs according to the hope of eternal life.” (See also Romans 8:17) We are taking a very cursory look at many topics here. These subjects need to be studied more thoroughly. The point here is developing faith in God.

How did He come to us? Verse 14, “And the Word became flesh, and dwelt among us, and we saw His glory, glory as of the only begotten from the Father, full of grace and truth.” Through a miraculous conception by the Holy Spirit, the Word (Jesus) was the first person to become a “child” of God. That is why we celebrate Christmas!

What Did He Do? 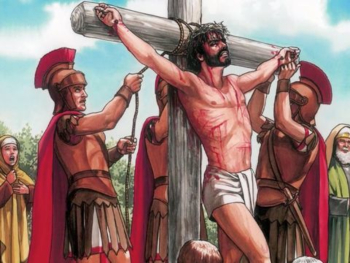 He allowed Himself to be crucified for all our sins and rose from the dead. (Which is why we celebrate Resurrection Sunday!) We are given the opportunity to become children of God, if we receive Him as our Savior!

Colossians 1:12 …giving thanks to the Father, who has qualified us to share in the inheritance of the saints in Light. 13 For He rescued us from the domain of darkness, and transferred us to the kingdom of His beloved Son, 14 in whom we have redemption, the forgiveness of sins. 15 He is the image of the invisible God, the firstborn of all creation. 16 For by Him all things were created, both in the heavens and on earth, visible and invisible, whether thrones or dominions or rulers or authorities -all things have been created through Him and for Him. 17 He is before all things, and in Him all things hold together. 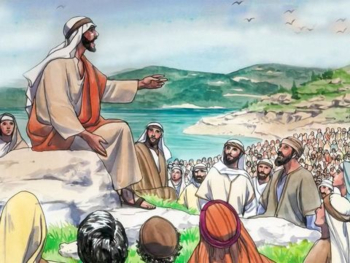 Jesus is the Creator and sustainer of everything, and He has always been God. He became a part of His own creation in order to show us His love, mercy and glory very personally. He came as the image of the invisible God.  “For in Him all the fullness of Deity dwells in bodily form…” (Colossians 2:9)

Because of His love and truthfulness, we can have complete faith in God and His words. He has always been the infallible Word of God. He is the Word, the expression of the love of God. What He did and still does, is love us with amazing sacrificial love!

He lived among us “in bodily form”, as Jesus. He came to His creation in order to pay the penalty for the fallen nature of all of mankind. The fall of man was inevitable and expected by the Creator. He had a fail-safe plan to “redeem” mankind, whom He knew would be deceived by the fallen angel (Lucifer), now referred to as Satan, the devil.

Faith In God: Freedom of Choice

All of God’s creation, including angels, were given freedom of choice, because He wanted us to choose to let Him love us and to obey Him. We obey Him because we love Him back. Freedom of choice without God’s help and guidance leads to rebellion against His law of love, which is called "sin". Since Adam and Eve were created, the fall of man was inevitable. That is why the Christ-event was planned even before the creation.

Check this out: 1 Peter 1:18 …knowing that you were not redeemed with perishable things like silver or gold from your futile way of life inherited from your forefathers, 19 but with precious blood, as of a lamb unblemished and spotless, the blood of Christ. 20 For He was foreknown before the foundation of the world, but has appeared in these last times for the sake of you 21 who through Him are believers in God, who raised Him from the dead and gave Him glory, so that your faith and hope are in God.

That is faith in God in a nutshell. Through these and many more scriptures we can “hear” the word of Christ (God) recorded from the beginning of creation. We can know that He loves us by what He did with an unfailing love, regardless of what we have done to sin against Him. We are separated from His love until we choose to embrace the Christ-event. His self-sacrifice as the Savior was what He did to correct that separation, because of His love for us.

If Jesus is who He says He is, then we have a choice to make! Romans 6:23 declares, “For the wages of sin is death, but the free gift of God is eternal life in Christ Jesus our Lord.” Acts 16:31, "Believe in the Lord Jesus, and you will be saved, you and your household." John 3:16, "For God so loved the world, that He gave His only begotten Son, that whoever believes in Him shall not perish, but have eternal life.”

Will we choose to accept His love and mercy? In order to do that, we must admit that we need His mercy. In Acts 2:38 Peter spoke through the inspiration of the Holy Spirit that had just come after Jesus went back to the Father in Heaven. Peter said to them, "Repent, and each of you be baptized in the name of Jesus Christ for the forgiveness of your sins; and you will receive the gift of the Holy Spirit.”

He Comes to Us As a Helper

That is just the beginning of faith in God. The incredible gift of the Holy Spirit, referred to as “the Helper” is given to us! Jesus told His disciples that He was about to leave. He was going to allow ALL of the sins of mankind to be piled on Himself. He chose to be flogged and crucified to pay the penalty for the sins of mankind. He said this to His disciples:

John 16:6 "But because I have said these things to you, sorrow has filled your heart. 7 "But I tell you the truth, it is to your advantage that I go away; for if I do not go away, the Helper will not come to you; but if I go, I will send Him to you.” Verse 13 "But when He, the Spirit of truth, comes, He will guide you into all the truth…”

Truth and faith come by hearing and hearing by the word of Christ. We have seen some of the amazing promises He spoke. We have seen by His actions that He is truthful. We can have faith and confidence in God. Things never cease to get better from there, as we “grow in the grace and knowledge of our Lord and Savior Jesus Christ”! (2 Peter 3:18)

True and powerful self-confidence is actually based on faith in God to provide wisdom when we seek it. Self-confidence without that relationship is an empty  shell that will break at some point.

Everyone puts faith in something or someone, even if it's just themselves. Here are some words of wisdom about self-confidence and trusting the Lord: Proverbs 3:5 Trust in the LORD with all your heart And do not lean on your own understanding. And, Proverbs 28:25 But he who trusts in the LORD will prosper. 26 He who trusts in his own heart is a fool, But he who walks wisely will be delivered.

Many images on this page provided by Good News Productions International and College Press Publishing.